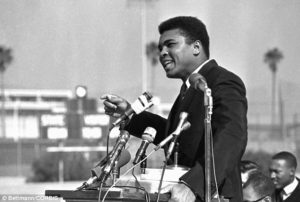 On June 3, 2016, the world lost a champion in Muhammad Ali. World-renowned for his confidence, charisma, and will, he was a source of inspiration for many of us that needed a figure to be their champion. Ali knew how to captivate his global audience through his words and actions both in and out of the ring. Known as the king of motivational quotes, among other titles, Ali’s words of wisdom have been used to inspire greatness. We love the classics –

“I am the greatest, I said that even before I knew I was.”

– but we wanted to dig deeper into some of his most inspirational speaking moments. Beyond just shooting out quotable lines, these moments showcase why Ali was such a great speaker – his conviction when laying out his arguments made it very difficult to doubt him.

Here are our three favorite speeches from The Greatest:

1: When asked what he was going to do when retiring from boxing

Favorite quote: “What am I going to do for the next 16 years — what’s the best thing I’m going to do? Get ready to meet God.”

Takeaway: In this video, Muhammad explains his view on what really matters in life and receives an ovation from the audience. Instead of making the audience hear about his plans of retirement, he turned the moment into a teaching moment on the things that truly mattered to him. Remember when presenting things that matter, it’s important to show what’s in it for the world, not just you (our first commandment of public speaking).

Favorite quote: “So don’t bet against me, I’m a man of my word. He is the greatest! Yes! I am the man this poem’s about, I’ll be champ of the world; there isn’t a doubt.”

Takeaway: Releasing an album to trash talk Sonny Liston, Cassius Clay (Muhammad Ali’s former name) released an album that exclaimed his greatness. In this poem, Clay showcases his extraordinary poetic skills delivering lines that rhyme and are memorable. While you don’t necessarily have to be a poet, think of delivering key lines in the form of 140-character tweets. Also remember that when presenting information, rhythm and timed pauses are key to retaining an audience and delivering an impactful message.

Favorite quote: “I’d like for them to say he took a few cups of love, he took one tablespoon of patience, one teaspoon of generosity, one pint of kindness. He took one quart of laughter, one pinch of concern, and then, he mixed willingness with happiness. He added lots of faith and he stirred it up well. Then, he spread it over a span of a lifetime and he served it to each and every deserving person he met.”

Takeaway: In this interview, Ali provides a great take on how he wants to be remembered in life after he’s gone. This is a strong indication for a presenter on the power of being humble and real. Selflessness and vulnerability will get people to listen.

While Ali’s pre-fight quotes will live through the test of time, don’t skip on his speeches outside the ring. Known to be one of the greatest speakers to walk this earth, he used confidence, passion, and rhyming verse to communicate his points. The key thing to remember about the world’s captivation with Ali is that he truly fought for the world and not himself. Great speakers today use the same tactic to find success – present what’s in it for the world, and you will be a champion in your own industry.

We owe Ali for teaching us these very important lessons. Rest in peace champ, and thanks for making the world a better place.