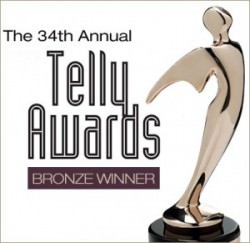 For those who don’t know, the Telly awards are known for being the premier award honoring the finest film and video productions, groundbreaking web commercials, videos & films, and outstanding local, regional, and cable TV commercials and programs. Each year, entries are self-nominated with approximately 11,000 submissions per year as of 2010, and the awards are judged by previous award winners. This was the 34th year that the awards have been held, and the first time that Big Fish Presentations have taken home awards.

This year’s Telly Awards recognized us for our work in the ‘Local TV and Local Cable’ category, as well as the ‘Internet/Online Video’ category.

In the ‘Local TV & Local Cable’ category, we were recognized for our Easy Living 30 second spot winning a bronze award for ‘Health and Wellness’, and another for ‘Videography/Cinematography’. The video shows a woman who tells the viewers a story about how her father, a World War II veteran, was her childhood hero. In the story, the woman discusses her growing concern for her father’s health as the two of them grow older. This concern is resolved when she learns about the services that Easy Living provide, once again making HER the daughter, and HIM the hero.

Under the ‘Internet/Online Video’ category, we won several awards. Our CMA Fast Cloud video won two bronze awards for its ‘Graphics’ and ‘Animation’. We also won another bronze award for ‘Animation’ with our SACA Motion Graphic video, which includes several fluid, colorful animations.

Lastly, we won our sixth bronze award for the ‘Art Direction’ in our Cabela’s TMS video. This video was shot using our unique “white board” technique, which shows the actor telling the story of the video by drawing and erasing various words and elaborate illustrations on a white dry-erase board.

Although this is our first year winning a Telly Award, we have every intention of adding more to our six in the future. When asked about our company’s success this year, our President and COO, Gus Murillo, stated “We’re extremely excited to be recognized by the Telly Awards, and we hope this year won’t be the last.”  He continued by saying “I’m just so proud of my team for the quality work that they’ve been able to produce for our clients.”

All of us here at Big Fish Presentations share Gus’ excitement and take great pride in the work that we do. We’re extremely thankful and honored to be recognized in such a major industry awards event.

Thank you for checking out our blog. Remember to check back in the future for more posts and videos to come.